The Ride London, now in its fourth year, is a behemoth of an event. This year somewhere in the region of 27,000 riders lined up to start the sportive. That in itself represents a monumental task of organisation and it has to be said, the staff running the event do a phenomenal job of this. From assisting riders in finding their start points to helping riders with mechanical problems, and sadly of course helping those that have been unfortunate enough to crash — they were brilliant.

I had in fact signed up and got a place for the Prudential Ride London-Surrey 100 two years ago, but various circumstances conspired against my participation until now. This all had the effect of just building my anticipation of riding on so many of the roads I know very well, but now they were completely closed to traffic.

When I arrived at the Olympic park at the ungodly hour of 5.45am I was amazed to see it already flooded with cyclists dropping off bags and being marshalled towards their respective start zones. I had somewhat of an interminable wait for my start as I watched wave after wave of riders flying through the start arch to the sounds of foghorns and The Style Council. They let each wave choose their start music, nice touch! As we neared the start you could feel a collective tensing up of muscles and building apprehension. Then as the foghorn sounded there was a chorus of chirps and clicks as garmins got going and cleats locked into place, we were off!

A group quickly formed off the front with the eager amongst our wave getting into a pace line and stringing our group out. I duly hopped onto the back of this without a second thought. However, it wasn’t long before I realised that the pace was too hot for me and as I eased up on the pedals I watched them disappear into the blur of riders ahead. Pride dented slightly, I took a moment to take in my surroundings, as I did so I saw an orange traffic light ahead. Without thinking, I was out of the saddle and sprinting to ​‘make it’ before sheepishly remembering it was a closed road sportive, and back in to my saddle I sat, hoping no else had witnessed my buffoonery. No need to worry about the lights, today, we ruled the road.

The early miles ticked by with a pleasing frequency as the sun started to make an appearance. Before long we were into an old training ground of mine, Richmond Park. No time for reminiscing, as the roads narrowed there was a little more jostling for road space and a first little bit of gradient to warm the legs. Onwards the endless throng of cyclists went, as far as the eye could see ahead and behind me on the road. Crossing the M25 we started to breathe in the fresh air of the Surrey Hills. 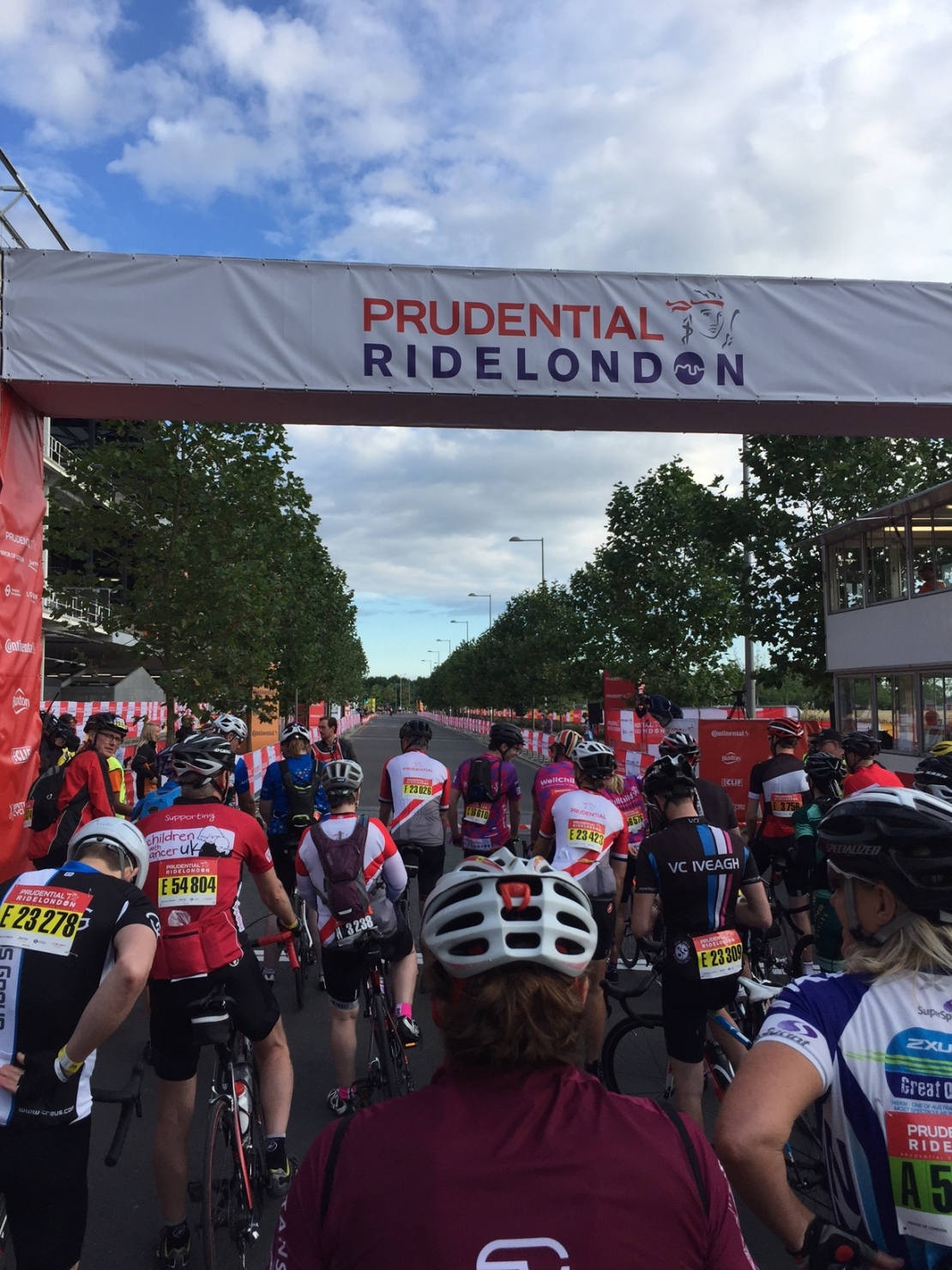 Crowds on the start line

First up was Newlands Corner and as the road began to rise, a cacophony of clunks echoed as riders furiously grasped for lower gears in a bid to maintain forward momentum. Thankfully the climb was neither steep nor long and the reward was a wide sweeping descent down towards the quaint towns of Shere and Gomshall. We then turned into the narrow hills proper on our way up to Holmbury St Mary’s. Knowing the roads well I was aware that the challenging Leith Hill climb was looming. As we reached its foothills there was a faint noise of some music. I progressed along the side of the road, the sound growing, until I was riding next to someone who had a speaker in his back pocket pumping out some tunes and turning the climb into a virtual spinning class, albeit with slightly more picturesque surroundings. This seemed to drive everyone onwards, apart from the guy who panted ​‘Leith Hill??! More like bloody Lethal!’

Riders took well deserved breaks and sustenance at the top of Leith Hill before re-joining the A25 for an undulating run towards Dorking and the final categorised climb of Box Hill. The men’s road race in the 2012 Olympics faced 9 loops of this climb, thankfully we had just the one. This climb is a friendly 5% most of the way as it takes in a few switchbacks and brings about great views over the south Surrey countryside.

It seemed that everyone felt they had made it at this point and there was a more relaxed atmosphere among the riders but there was still a good 25 miles to go on tired legs and certainly a few little surprise hills. The one that seemed to catch many out was Wimbledon Village Hill which is a short sharp ramp that I certainly witnessed a few riders almost grind to a halt on. At this point I had linked up with three other riders and we were doing a nice job of keeping a reasonably high pace and taking turns at the front. Keeping 38km/​h up after 90 miles of riding while avoiding hoards of other tired riders was no mean feat. Then as we rode along the embankment there was a building excitement as we knew we were not only approaching the end but also a chance to ride down The Mall. Hoardings ran down either side of the road with crowds packed along every inch, Buckingham Palace lay in front, the only thing left to do was sprint for the line, sprint for glory, sprint for victory! Well, this all came to a limp conclusion as the crowds meant I had to jam on the brakes short of the line, dismount, and wheel my bike over the line.

The crowd of riders at the finish area continuously swelled as marshals were handing out medals and directing people towards bag collection and the exit. Once again it has to be said, they did a fantastic job of this, making it as painless as possible given the huge numbers involved. The ride back to the train saw me almost run a red light as I quickly had to switch back to the normal rules of the road and re-assume my position on the left.
Given that I’ve ridden both longer and more hilly routes in the past I wasn’t sure that Ride London was going to be special, but with roads closed, hoardings up, and fans cheering along the way it made for a truly special day out on the bike. So, despite the 4.30am alarm call, I enjoyed the the whole experience and will be getting my name down in the ballot for the 2017 edition as soon as it opens on August 8th. 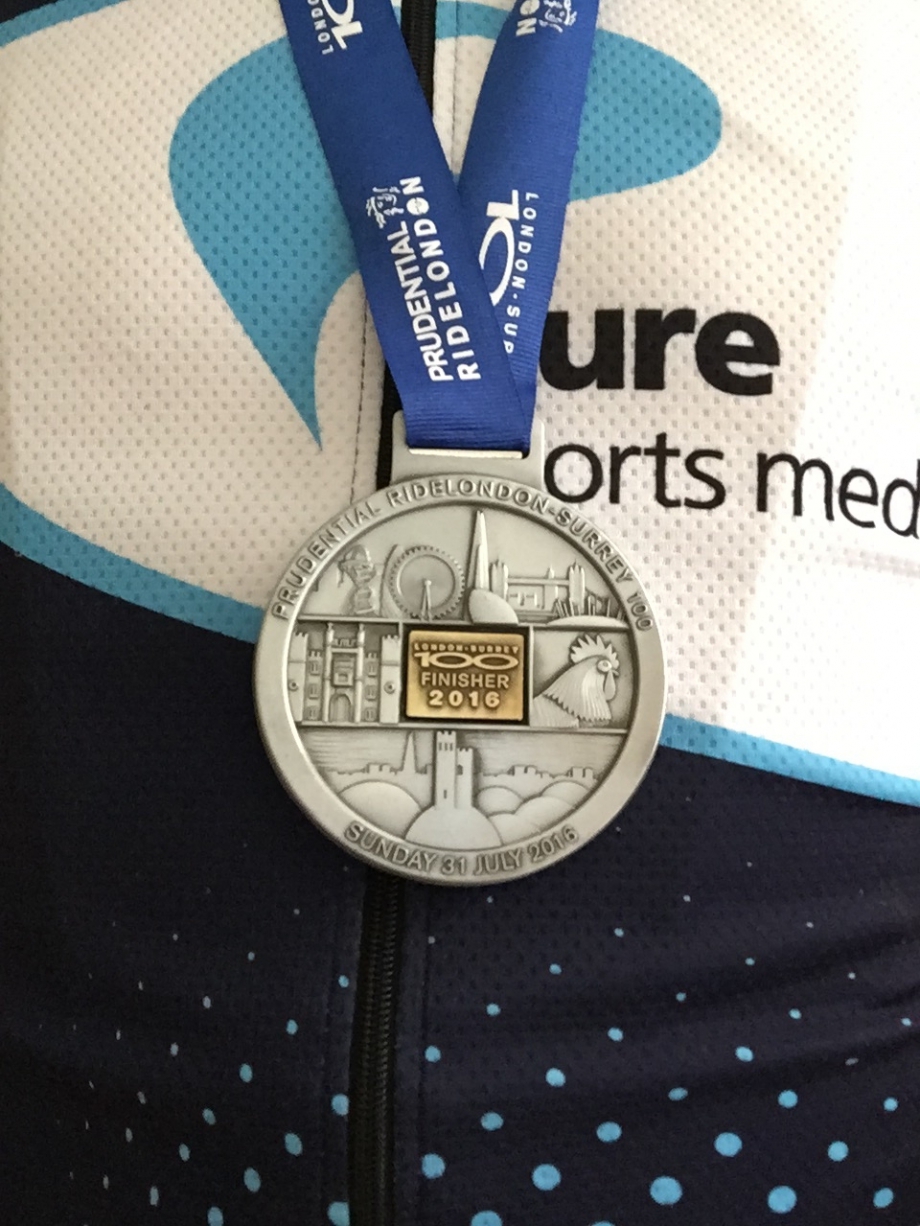