Achilles Tendinopathy is an overuse related soft tissue injury that affects around 9% of recreational runners, but does not discriminate and can occur in less active individuals too.

We now know that very little inflammation is present and therefore now use the term tendinopathy instead of tendonitis. It is characterised by pain along the tendon or at its insertion on the calcaneus (heel bone). Patients typically report pain during their first few steps in the morning, after sitting or at the start of a run. Symptoms can often subside once warmed up, but can return if too much time is spent weight bearing. Those who have experienced it or currently have it will appreciate how stubborn it can be!

What is the Achilles Tendon and what does it do? #

The muscles of the calf complex, including the gastrocnemius, soleus and the plantaris, all unite together to insert on to the calcaneus, forming the Achilles Tendon, the largest and strongest tendon in the human body. It is around 15cm long and remarkably absorbs around 3 – 4x bodyweight in force whilst walking alone, and up to 6 – 8x bodyweight whilst running, therefore requiring substantial amounts of strength and durability. It plays an interesting and complex role in running:

When the Achilles is unable to lengthen and recoil effectively due to factors such as poor muscle control, overload injuries such as tendinopathy can soon develop. At the Achilles, it may be at both or one of two locations along the tendon: 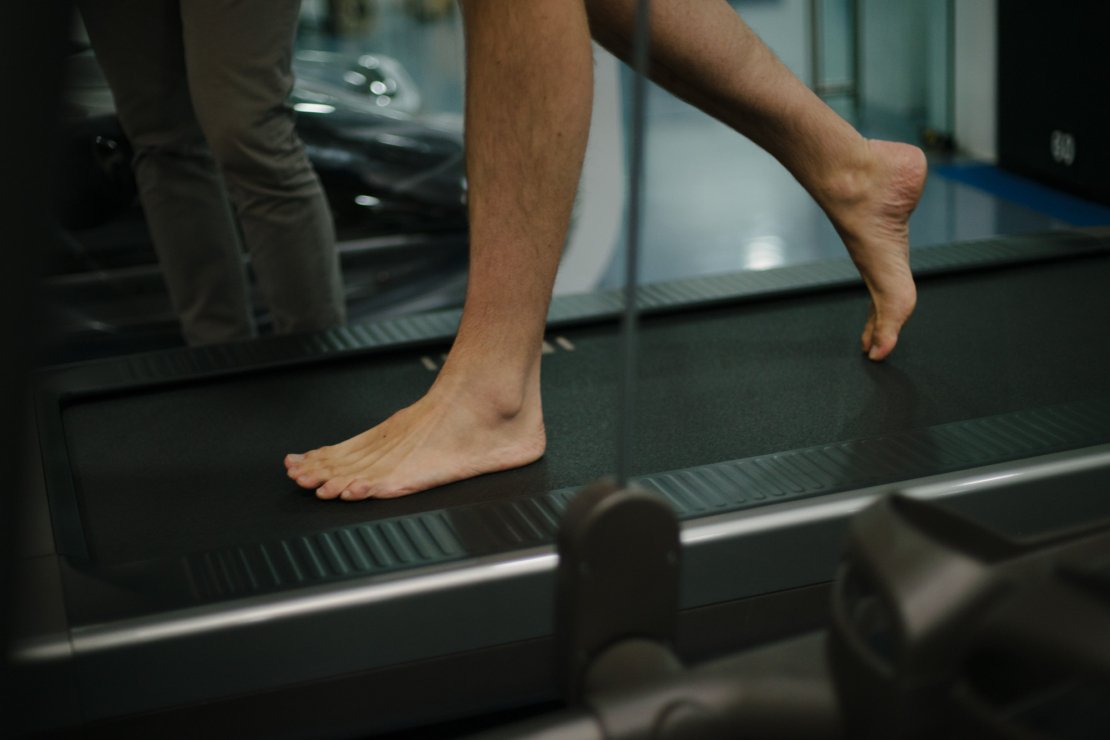 On a day to day basis, tendons will typically undergo a process of wear and repair, relative to how much we use them. When the wearing process exceeds the ability of the tendon to repair, we get overload and changes within the tendon can occur at a cellular level, leading to pain and dysfunction. Whilst every individual is capable of developing an injury, research tells us there are internal as well as external risk factors related to developing tendinopathy.

Internal risk factors relate to those that are within the body, and include but are not limited to; advancing age, obesity, gender, previous tendinopathy/​injury, diabetes,certain antibiotic or steroid medications, lower limb strength, poor ankle mobility and foot biomechanics, amongst others.

External risk factors refer to those outside of the body, and can include; sudden changes in training patterns (increase in volume, intensity or frequency of activity), activity levels or footwear. Both internal and external risk factors can influence the wear and repair process of a tendon and therefore must be considered when following an exercise programme.

We know there is no exact recipe for a speedy and successful recovery, so management needs to be individualised. In the early phases, a temporary reduction in training load can often help to settle an irritated and painful tendon. Whilst complete rest is not advised, modifying training routines to offload the tendon should be considered. This could include simple modifications, such as low impact cross-training using a bike and rowing machine instead of running in isolation, for example. Additionally, non-steroidal anti-inflammatory medications are often prescribed for pain relief.

Footwear is also an important factor to consider. Shoes with a slightly higher heel stack, or inserting a temporary heel raise can often provide relief as they unload the tendon. A Sports Podiatrist can offer specialist opinion about the role of orthoses and footwear, if indicated.

At the appropriate stage of rehabilitation, an exercise programme consisting of strength and flexibility exercises is introduced by your Physiotherapist. This aims to gradually re-introduce load, in turn increasing the tendon’s capacity and robustness to safely bring training loads back up to pre-injury levels. Many people are often delighted to hear that they can still run whilst managing this problem, though finding the right balance of exercise is key. Typically, this would include eccentric based exercises or heavy slow resistance training in a gym, both of which have been shown to be successful in treating tendinopathy over at least a twelve week period. Sometimes a combination of the two may be utilised. This is also often supplemented with analysis of running form and in the latter stages of strengthening, plyometric training (often under the guidance of a strength and conditioning coach) which after increasing strength, focuses on the ability of our muscles and tendons to rapidly transition from lengthened to shortened positions efficiently, as described in the running cycle.

There are of course some occasions when exercise based intervention alone isn’t enough, in which case a Sport, Exercise & Musculoskeletal Medicine (SEM) Consultant can discuss some of the other options available to you, such as extracorporeal shockwave therapy (ESWT). This should always be used to supplement an exercise based programme instead of in isolation and is gaining increasing evidence.

Although Achilles Tendinopathy may be a frustrating and debilitating injury, the good news is that around three out of four people will respond well to appropriate rehabilitation programmes and can return to their previous levels of activity.

Speak to a member of out Multidisciplinary Team today to see how we can help get you back on track to hitting your milestones and PB’s!