In 2020 we saw many people re-turn, or turn, to tennis as their form of exercise, due to its naturally socially distanced nature and the warm weather we experienced that summer. During, and since, this surge in popularity, one common acute and persistent complaint we’ve seen in clinic is, the appropriately named, Tennis Elbow. As the name suggests, Tennis Elbow is one of the most persistent complaints experienced by tennis players. It is suggested that up to 50% of players develop these symptoms at some point during their career. However, the prevalence of these symptoms is also common in the non-tennis playing population as well. See: Tennis Elbow: Advice for Non-Tennis Players. 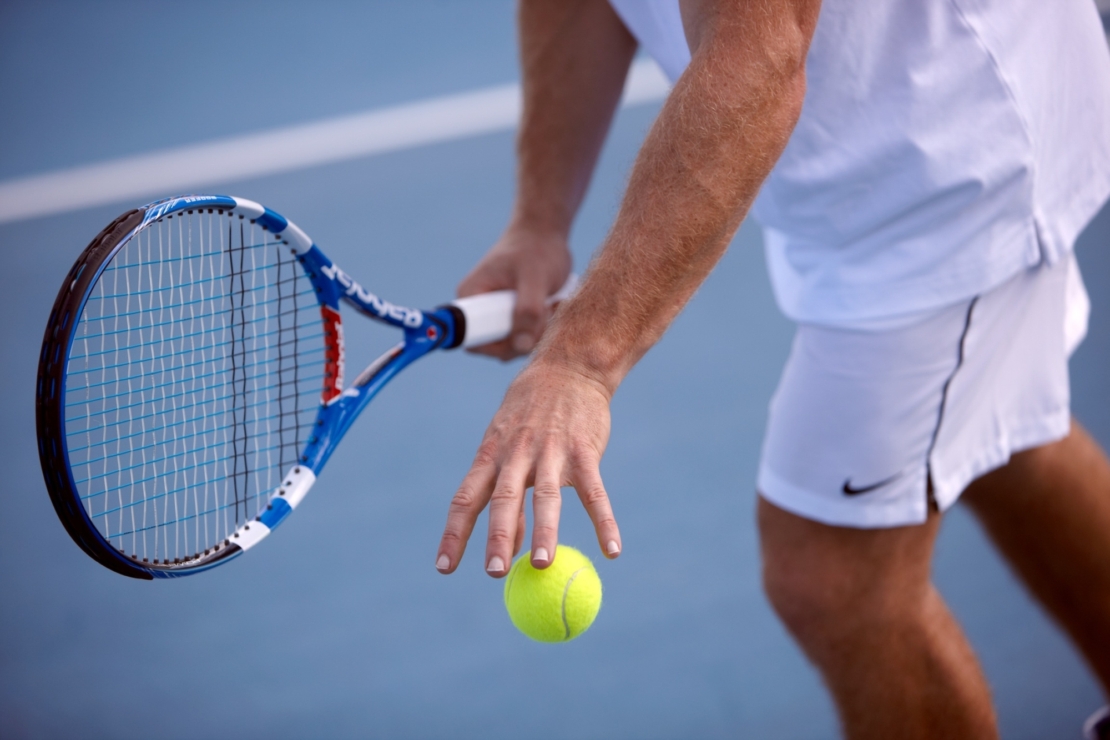 What is Tennis Elbow? #

Tennis elbow is the most common cause of discomfort felt on the outer side of the elbow and can often be felt specifically on the bony prominence. This discomfort generates from one of the tendons that attaches some of your wrist muscles into the elbow. It is usually exacerbated with day to day activities such as gripping shopping bags, preparing meals or shaking hands and it can be felt with more vigorous activities such as tennis.

The pain can range from mild discomfort to an inability to play or function as normal. Any limitation in taking part in activities you enjoy can be extremely frustrating, especially when you add that to the frustrations and worry recent times have brought.

If you have symptoms in the elbow following recent trauma — a loss of range of motion or changes to the sensation in your arm and hand — then it would be worthwhile discussing this further with a clinician.

Is It Due to My Technique? #

The questions we’re commonly asked by tennis players usually relate to technique-specific components. However, it is excessive or unaccustomed activity that is likely to be the most important factor to be mindful of — particularly following a period of limited activity, like we experienced during the early stages of lockdown. The onset of new symptoms may be attributed to changes in your activity levels in terms of: type, intensity, frequency or duration of play.

During match play, the forces through the forearm are expected to be high whilst your forearm muscles dynamically stabilise your wrist to produce greater speed or spin. The most common complaint we have seen in clinic is from performing a single handed backhand. It has been reported that some recreational players, when compared to more advanced players, generate higher forces through the forearm due to a combination of varied or different grip type and an inability to generate forces from the rest of the body. For example, your body position and footing act as a foundation in order to generate speed and power in a shot from behind the ball, and if these areas are not focused on your upper body may be absorbing higher forces.

In those experiencing elbow pain, striking with greater wrist flexion has been observed; a trait not seen in higher level players. A link has also been suggested to the degree of your forearm rotation (palm to the floor) when executing a topspin forehand. External variables, such as: racquet type, grip size, string tension, court surface and weight of the ball, can also have an influence on your symptoms.

It is important to make clear that no strong association has been identified between injury and technique alone. Careful consideration is urged before making any drastic changes to the way you play. Modifications to the elements mentioned above, may allow you to play with a greater degree of comfort, such as a lighter racquet for example. If uncertainty remains however, we recommend discussing with your treating clinician.

Other Factors to Consider #

As mentioned already, the most obvious contributing factor for many were changes in usual activities, hobbies or lifestyle over the past couple of years. It’s also possible that there could be multiple contributing factors to your elbow pain, and the ongoing lifestyle changes of late are likely to have escalated this.

For example, Tennis Elbow has been associated with multiple lifestyle contributors, which can include: any co-existing medical complaints, your work, the support you receive at work, social circumstances, stress levels and any current symptoms in your neck or shoulder. Therefore, when considering possible contributing factors, it is likely that these will vary between people and be specific to each individual. Often a broad approach should be considered to move forwards; the aim is often to improve your load capacity at your tendon, this may include local strength, improving the whole body’s force production or considering other factors that may reduce your load capacity such as sleep, stress and other lifestyle variables as above.

What Can I Do About My Elbow Pain? #

Usually patients with tennis elbow will experience a good recovery. Often an active approach or exercise programme proves to be very important. Strong scientific evidence demonstrates those prescribed an exercise plan see significant improvements in both the medium and long-term stages of their recovery journey.

The type of exercise required will be individual to you, your current complaint and your lifestyle and commitments. It is likely to consist of specific (focusing on the elbow and surrounding muscles) and some non-specific exercises (building strength in the whole body or neighbouring area e.g. the shoulder), as well as looking at your approach to fulfilling your moderate or vigorous levels of physical activity. If there is a failure to see any improvement, a reflection on the diagnosis and contributing variables may be required with your treating clinician. At this point your clinician will consider the input of other disciplines and treatments, which is where our multidisciplinary team comes in handy.

Below are some FAQs we’ve been asked when working with patients who have elbow pain:

Quite the opposite. Continuing activity is important, but the amount and possibly type of activity may need to be temporarily modified.

Professional guidance should prove beneficial if you have high levels of pain and discomfort, your function is reduced, your symptoms are persistent, or you have upcoming competitions/​events you have concerns about competing in.

There is some support for the use of a brace, in reducing symptoms during the painful activity but it is unlikely to impact your long-term outcome.

Although most feel immediate relief, cortico-steroid injections have shown poor long-term outcomes, when compared to no treatment at all and a greater rate of recurrence, therefore it is usually not advised.

Exercise prescription should be individual to you, so it is important that the exercise intensity is tailored for you and your current fitness and pain levels in order to have the optimal outcome. Your bespoke plan should include both specific exercises and general considerations which your treating clinical will advise on. For some basic exercises, please see the videos below.

A couple of points to consider:

If you are noticing any difficulties after exercise or the challenge is too great during, then please consider the following regressions.

Modify the resistance of the band.

Modify the length of the lever or the speed of the bar drop.

If you are experiencing pain on the outside of your elbow, we suggest seeing one of our team for an initial assessment to begin your recovery journey.

If you’re aware of the cause a Physiotherapist would be a good point of call, however if you are unsure what has caused it, a Consultant in Sport, Exercise and Musculoskeletal Medicine is the person you’ll want to speak to first.