Dependent on the level of training you have managed to maintain during the lockdown period, detraining may have occurred.

The table states that muscle size, activity, strength and power are decreased after long term detraining (8 weeks+), raising the risk profile to muscle injuries. In addition to this there is change to the soft tissue cartilage (our joint’s shock absorber) which again increases the risk of injury should the demand of these structures be increase without gradual exposure but also without optimal muscle strength.

The table also shows that tendon (structure that joins muscle to bone) is impaired. If our tendons aren’t able to generate or withstand the power and load absorption required of them during competitive activity then following a period of de-training there is an increased risk of tendon rupture. In fact, this was seen in the NFL in 2011 during the lockout period.

The NFL players demanded increases in salary and better medical care in 2011 and forced a lockout of the league which lasted for 14 weeks. Following this period, when reviewing the early data there was a significant number of Achilles tendon ruptures in both training and the beginning of the preseason. They reported that the average age of Achilles tendon ruptures was 6 years lower (23 years) than that of the previous studies (29 years) and that the ruptures occurred more in rookie players rather than in older more experienced players. This takes in to account the ​‘training age’ of individuals whereby long periods of consistent training and competition seemed to deal with the effects of de-training in the lockout period better than those just starting out. So, just because you are younger, doesn’t mean you are immune to injury!

However, as mentioned earlier, only looking at the information as it is made available to us doesn’t give us the full picture. One study analysed injury data 4 years before and 6 years after the NFL lockout and concluded that the 2011 lockout did not have a net harmful effect on injury burden in the NFL.

What can I do to reduce the risk of injury when I go back to playing? #

Individual athletes in events like cycling and running may have had the luxury of being able to complete similar intensity training sessions on watt bikes/​turbo trainers or out on the road, though strength training programs may have taken a back seat with limited home equipment. Team sports where multi-directional loads are placed through the body may not be easily replicated at home and therefore a similar intensity of re-training won’t be achievable until returning to team training.

Re-training takes time. The increase in injuries on return to sport is suggestive that many of the players may not be match ready and therefore it is important not to rush back. One study followed the detraining and retraining of a GB rower following an Olympic games, whereby the rower rested completely for 8 weeks and they then measured his retraining statistics at both 8 weeks and 20 weeks of training. As you can see from the table below taken from this study, it wasn’t until 20 weeks of re-training (Post 20) that the athlete returned to similar levels of power and endurance than when starting the Olympic Games.

Having noted the changes in both muscle and tendon health following detraining and the subsequent risk that a reduction of these characteristics have on joint health and injury risk it is important to gradually build back to pre-lockdown strength and power programmes. Given that gyms are still closed and therefore many of you have been training at home without resistance (unless you were lucky to get your hands on the precious kettlebells that sold out!) then it is important to train at a level that challenges you, your muscles and tendons.

Making the most of the space and equipment you have at home is essential to maintain your current strength. There are several variables you can alter in order to make the exercise more challenging (weight, time under tension – speed of movement, height, plane/​direction of movement, jumping/​landing).

Most importantly, once you have a group of exercises that challenging enough and that mimic the demands of your sport/​activity, you should work to gradually increase the volume (reps x weight), intensity and time (frequency/​rest). This is called progressive overload.

If you aren’t sure where to start, a consultation with a Strength and Conditioning Coach may be a good place to start.

Given the impact of COVID-19 on the respiratory system, it is currently unknown what the effects of this on return to sport may be. If you have contracted coronavirus your cardiovascular fitness may take longer to improve than normal and it is important to gradually increase exercise duration and intensity. Muscle injuries are prevalent in sports that involve sprinting, and similar to gradually increasing weights in the gym, a return to sport should also involve a return to sprinting to reduce the risk of a muscle injury when returning to team training and competitive matches.

Injuries commonly occur while in a fatigued state and therefore training and increasing levels of intensity and then performing strength or skill based work following this can be one way of challenging yourself under fatigue.

Nutrition is another key factor in minimising the risk of injury. If your activity levels have reduced then your energy needs will reduce alongside this. When returning to sport/​activity and your energy needs are increased you should look to increase your calorific intake to match this. A sharp increase in training without the nutrition to match can lead to problems such as stress fractures and is known as part of Relative Energy Deficiency in Sport (RED‑S).

As important as it is to train back to pre-lockdown levels of fitness, you must also ensure you have factored in rest periods in your programme. Your body needs time to recover and even more so following a period of detraining. Sleep is so important in both muscle and brain recovery and memory but also performance. If you haven’t read it yet, I would urge you to read the book ​‘Why We Sleep’ by Matthew Walker who goes in to much more detail on the benefits on performance an recovery following a good nights sleep of 8 hours or more.

Sport and exercise are well documented and researched for their positive benefits on our mental health. I am sure that many of you may have felt the impact that not playing the sport you love has had on your mental health and are very much looking forward to getting back to training or playing. Some may feel a reduction in confidence on the thought of returning to play having not passed a ball or been able to defend a goal for some time. Following an injury this is also common and it is important to address these factors before returning to competitive sport as when we are fearful of something we compensate to protect ourselves and this can increase the risk of injury. If this is something that you are worried about discussing this with your Physiotherapist, Doctor or a Psychologist can be a good step forward in formulating a plan to gradually expose you to sport with confidence.

A return to sport should involve a graded, progressive increase in strength training, conditioning and sport specific match training at varying intensities. Elite sport have rushed back to their seasons in order to finish the current season, however, recreational and sub-elite athletes are in a position to take time to get back to the sport they love and reverse the effects of detraining.

Teams should complete a full pre-season on returning to ensure that the above needs are met. Getting to the first match doesn’t mean you are 100% fit however. One way to manage this return to sport and within the season is to monitor Acute:Chronic workload ratio. See below the infographic I have created for this. 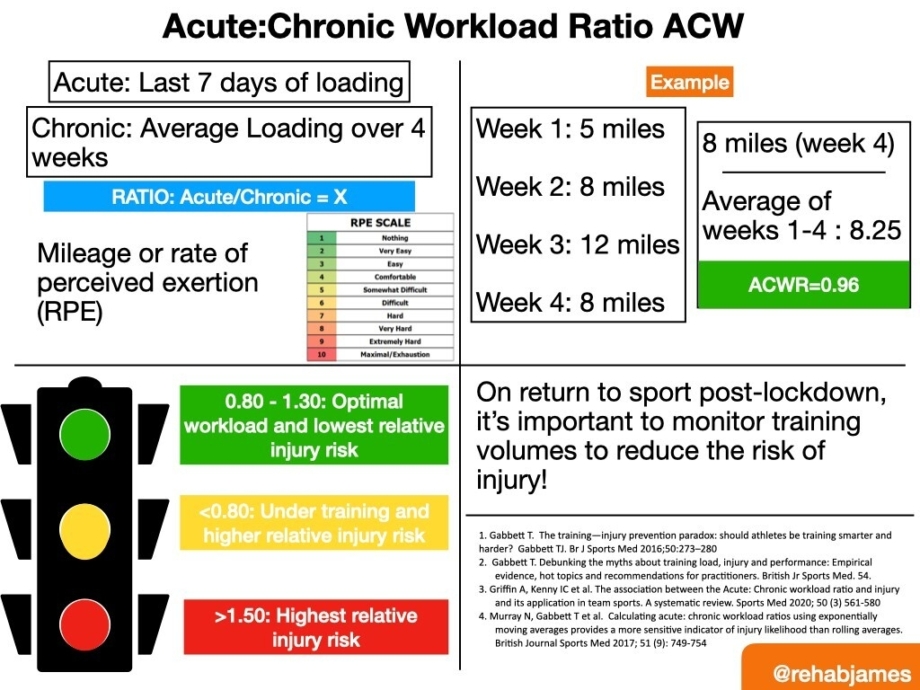